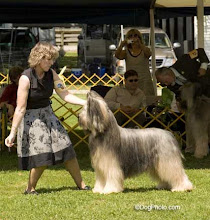 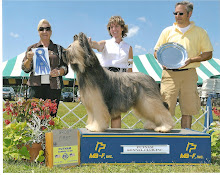 Am Mex Ch Deja Vu Mia Cool As A Cucumber 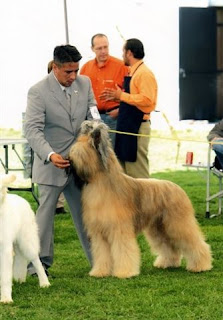 Dill is in Mexico. He is having quite a bang up career there. He is co-owned with the Fischl family-father Christian, mother Lala and daughters Paula and Lourdes. He sleeps in Paula's bed at night, waits for her to come home from University every day and generally is flourishing in his new life there as show dog and family pet with kids (he loves them).

So far in 5 months of showing Dill has won about a bazillion Herding Groups and has climbed up from non-champion to the Number Two ranked dog in the Herding Group. Very cool for such a young dog not yet in his prime.

Dill is not perfect, but his outline, proportions, breed type and beauty is arresting. He has such a lovely head, solid topline and classic carriage. He is a proud guy. You can see it in his natural carriage and style of being.

Carriage is one thing I consider heavily important in the Briard. It is something intangible but of tremendous significance. It is part of what makes a Briard a Briard-not a Bouvier. The standard for the breed is so defined about how the dog should operate in the world, how he should present himself in life and carry himself in general.

I read and reread the AKC standard arbitrarily and intermittently over time. Every time I do, I take away something new which I missed or forgot about. Last time I looked at it, the passage about carriage struck me with a fresh appreciation. In the first sentence the words "vigorous and alert" implies a certain countenance and carriage. But go on to the specific " the head joins the neck in a right angle and is held proudly alert".

Recently there was a discussion on one of the inane Briard lists on the internet about head carriage. As long as I have been in the breed I have heard the clueless expound on proper head carriage. They like to say the dog should carry his head low-many proclaiming greatness in the presence of a dog who looks like a plow horse-head being carried in motion in a line below the shoulders. There is nothing proud or alert about a plow horse. The carriage is more reminiscent of a Border Collie or crippled old Cocker Spaniel than a Briard.

The clueless like to say the dogs who win too much look more like "prancing Poodles". My mentor and friend Mary Lou Tingley in response to a photo posted demonstrating the low head, long strung out body of a bad moving devoid of carriage Briard remarked that it was probably herding field mice. Indeed, that is what it looks like-one line from tip of nose to tip of tail. We call them "flatliners". Like the cardiac monitor of a dead person-one flat line.

Dill will never be a flat liner on his worst day.
Posted by Terry Miller at 11:58 AM 8 comments:

My Best In Show dogs-there are eleven 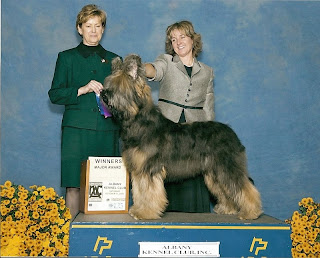 Three weeks ago we added to the list of Best In Show dogs. This time it was a 9 month old puppy. This Best In Show was from the classes. In other words, she was not a champion at the time. She was a 9 month old puppy entered at a dog show in order to complete her championship. She got a 5 point major that day.
This is a rare occurance at a dog show indeed. There are a handful of dogs it has ever happened to...and usually, it has been the very fancy breeds it happens in-Pomeranians, Standard Poodles, Afghan Hounds. It has never happened to a Briard. The puppy is the youngest Briard to win a Best In Show (breaking her dam's own record). The puppy is the only Briard to win a Best In Show from the classes-ever.
She was Best Of Breed the first day, beating her intermittently lame Lyme Disease affected granddsire Udo and others. Then won the Herding Group. The second day history repeated itself (this time Udo was too lame to compete at all) but she went all the way to be the last dog standing...Best In Show.
The puppy is from CH Deja Vu Mia Chain of Fools (Udo x Suzie) bred to Ch Deja Vu Ruffles Have Ridges PT (Flynn x Lena).
The puppy's name is Eastbay Deja Vu Enjoy The Ride.
Posted by Terry Miller at 12:26 PM No comments: 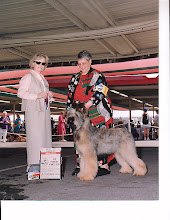 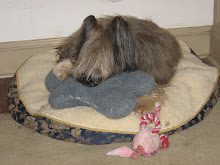 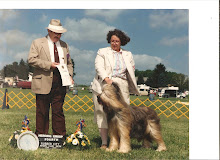 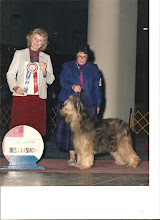 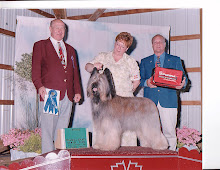 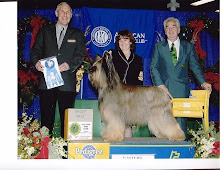 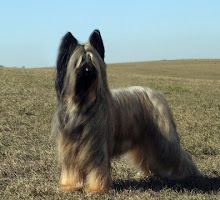 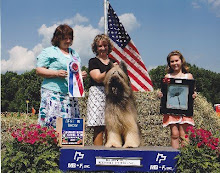 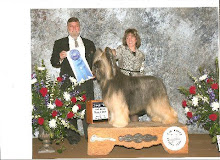 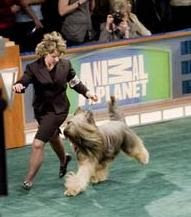 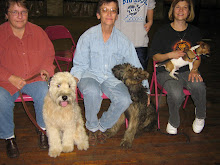 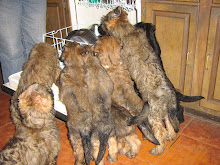 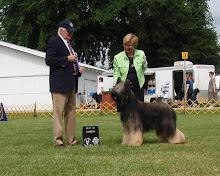 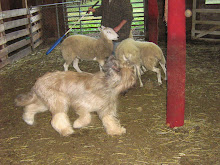 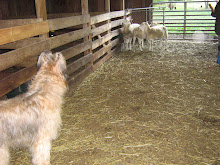